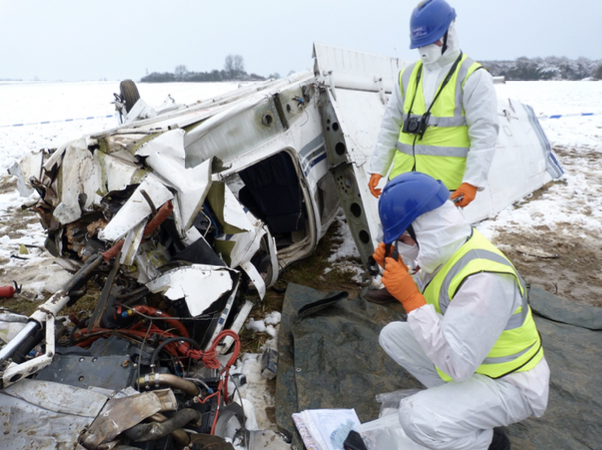 There has been a deluge of information and Apps over the last month aimed at moving teaching environments online.  For the Accident Investigation staff this has been of great interest due to the high requirement for contact time and physical props in the execution of our courses.  The Aircraft Accident Investigation and Response (AAIR) [online] course gave us our first experience of migrating our product to this new world, with surprisingly pleasant results.

The AAIR course aims to provide an insight into the investigative process enabling students to conduct a week-long investigation into a simulated aircraft-based incident.  The issues in migrating this online are multiple; from the need to survey a wreckage site, interview witnesses and collaborate as a team.  As stated at the beginning, there’s lots of remote learning help available which was utilised to achieve our aim. The experience gained from this activity will be detailed chronologically below in the hope that others may benefit from our early experience.

There were a number of areas in the preparation that needed a new approach.  The most important being choosing the delivery media and understanding it’s capabilities.  The ‘Teams’ and ‘Blackboard’ platforms were chosen as having the right combination of capabilities to achieve the course aims.  Leigh Dunn designed an excellent course on Blackboard which incorporated a novel scenario concept which was key to shaping the narrative of the week.  Whilst Blackboard is a known quantity, Teams presented a steep learning curve; and was a curve it was important the students joined us on.  It was found that the majority of students already had a very good grasp of the Teams platform, most likely due to the current climate.  Testing of the delivery was also helpful; setting up a dummy student with no knowledge of the platforms enabled us to cater for all skill levels.  Engagement beforehand with the students enabled them to gain the basic understanding of Teams and Blackboard prior to the first day and utilise the Cranfield IT resources as necessary.

The first day took students through underpinning theory and the initial stages of an investigation.  The first lesson was delivered by the Director of Transport Systems Graham Braithwaite; and after introducing the module lead Leigh Dunn and I; a simple set of ground rules were established.  These covered leaving microphones muted unless asking a question, highlighting student time zones (To enable better allocation of groups) and the use of the chat area.  The ‘General’ Teams chat was presented for course questioning and was constantly monitored throughout the course delivering a constant presence of staff.  This is not as time consuming as it may appear as your ‘Activity’ tab in Teams will inform you of any questions while you get on with other work.  For the majority Teams seemed instinctive, probably due to the high use of these platforms currently.

At this point, behind the scenes, participants were checked against the course list to ensure that we had everyone expected and that they were engaged in the course.  Then constant monitoring of the questions in the ‘chat’ allowed the presenter to continue without breaking flow; whilst the ‘Admin host’ fielded questions, supplied answers and posted links to enhance the experience.  We found later that during some lessons the chat needed to be carefully managed to prevent students digressing off topic in these chat areas.

The latter sessions of the day were achieved by recorded delivery on Blackboard which enabled flexibility for the students to cater for varying time zones and work commitments.  Following this, students were presented with an accident site in Blackboard using aerial video of a previously set-up physical site, supplemented with a series of photos of the site.

The final task for the day was to individually answer a set questions based around the topics covered throughout the day which related to the scenario presented.  This piece of work provided the staff with a chance to gauge understanding ready for the following day’s Workshop where any shortfalls in understanding could be addressed.

Day two began with some more live theory delivery before the Workshop phase where the accident site was discussed in detail taking the class through their submissions and allowing for discussion.  These live sessions are key throughout to ensure understanding of the material and allow for questions from those who may not completely grasp the content.

At this point the simulation began which was a four-day group-based exercise around a second incident.  The scenario here was the key component to mitigating the lack of an accident site.  The idea being that they were informed remotely by an investigator in the field, who then fed back information and reports on request.  Items such as images, logs, witness statements, procedures, training material, manifests and documentary information.  This was the basis for the site collection phase mitigating for the lack of physical site attendance.

The students were provided with four ‘Channels’, created in Teams for groups to use as their ‘Group room’ where they could post messages, share files and have meetings.  These rooms were excellent for staff to monitor progress of the students through observation and join in discussions to help shape learning.  The participant locations ranged from The USA to India [Grouped accordingly] and it was noted that the group members were happy to accommodate those working relatively unsociable hours.  In this context, it is likely that members of an aviation investigation will be in various time zones so this obstacle actually enhanced the scenario.

The day was once again linked to the next days activity through recorded presentations on ‘Investigative Interviewing’.  This supplemented the end of day task for the students to review the evidence, decide who they wanted to interview, and what further evidence they would like to have collected.

The following day was dedicated to interviewing with actors and experienced professionals which brought a new online obstacle.  The day began with a live session for the students to ask questions about the recorded content and practice as required prior to their requested interviews.  This was achieved through a further 16 Channels for student pairs to use as interview rooms.  In addition, two group rooms where created where 50% of the course [one of each pair] could be briefed on an interview scenario out of view of their partners.  This was used by the students for practicing interviews together; but the interview scenario was not utilised by the lecturer in this case.  It is best to remove the extra channels once finished to avoid confusion in Teams.

The live interviews were carried out with two students leading and the remainder in the background muted; using the chat to discuss the interview as a group in apparent silence.  The actor entered the Team room and engaged, while the staff observed and commented in the chat.  One actor even managed this activity via an IPAD only.  Once the interview was complete the group came back together for a debrief on how this went from the actor, staff and team perspectives.  This activity worked particularly well and could be used in reality; so once again an obstacle actually enhanced learning in its application.

Day four took the students to the analysis phase which utilised both recorded and live lectures employing the delivery lessons detailed previously.  They now had all their evidence and completed the day submitting an analysis model demonstrating the days topics and highlighting two accident events to focus on.  The activity was closely monitored in the team rooms to ensure they were kept out of any ‘rabbit-holes’.  This was done much the same as described earlier, through observation and intervention.  The activity could be merely observed in some cases as teams got to the desired outcome.  Others required staff input to keep them on track and reinforce the topics covered.

The final day saw these models develop into safety recommendations after both recorded and live delivery along with questions.  These recommendations were then presented by each team and discussed by the class with the staff guiding proceedings.  The final activity of recorded delivery and the setting the final assignment; a review of a complete accident report for future submission.

– Pre-warn students of modes of delivery prior to arrival and signpost resources.

– Novel scenario development can turn the online environment into an advantage.

– Obstacles can often add realism through new forms of interaction which can mitigate the loss of contact time.

– Mix methods for international flexibility and to maintain interest.

– Shape the classroom prior to activities [interview and group working areas] to corral students.

– Student capability in the remote environment is currently ramping up fast and they are more comfortable than ever before with collaborative platforms.

In these difficult times there’s a huge empathy with the challenges faced by institutions in adapting to remote learning; and the world is adapting alongside.  Remember, obstacles can often throw up surprising opportunities which will mitigate some of the lost fidelity; recognise these new tools and adapt.