Turn The Ship Around, Mission Command, and Jumping to Conclusions (Part three from four)

One of executive’s and management’s favourite sports is jumping to conclusions, or jumping to solutions before a problem is really understood and the evidence gathered!

It is one of the most difficult things, when facilitating a team to take up leadership or in solving problems, to not jump in with a solution! As Turn The Ship Around author, David Marquet, notes in one example where he and the Officer of the Deck (i.e. the guy who is responsible for the movement of the ship) are on the bridge and Marquet essentially asks the OOD to make a turn, rather than allowing him to explain why he was waiting a few seconds longer. This meant the OOD had immediately lost confidence and lost control and Marquet was immediately steering the ship! Not the right result!

We’ve been introducing the concept of Mission Command / Centralised Intent and its associated 8 Stages. 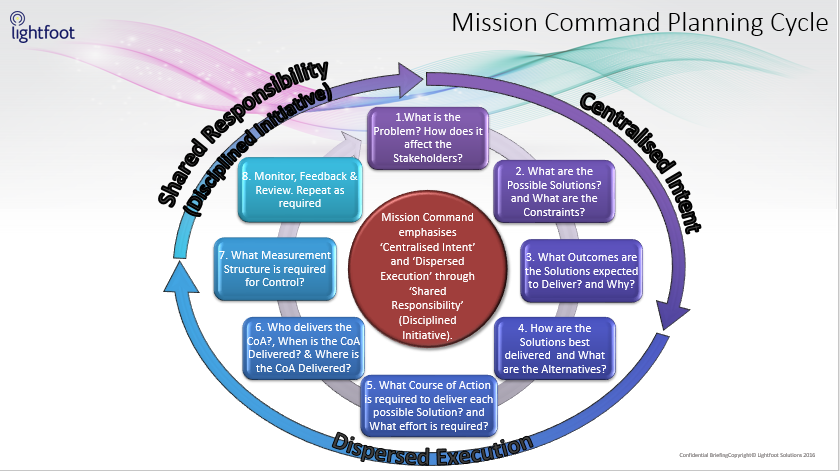 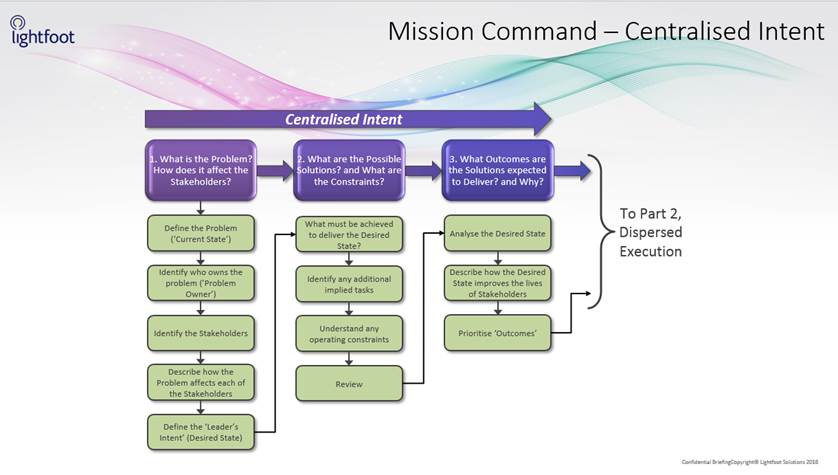 a. What must be achieved to deliver the Desired State:  This is where it is essential to understand not only what your boss wants, but also his or her boss’ intent. It is essential because it not only enables you to reconcile it with the intent of your boss, but it enable you to grasp your role in the bigger picture. It also sets the context for what you are going to ask of your team.

For example, working with a Public Sector organisation: Executive and senior management were expressing the need for “One Team”. Yet, because some managers has not understood the Centralised Intent, they were holding onto critical staff for their portfolio even though they were at times essentially under-utilised, when there were other portfolio owners desperately short of resources. This level of understanding also provides guidance when unexpected events occur and overtake agreed plans – the antithesis of Micromanagement. Essentially, this is the basis of so-called “Agile”.

b. Identify any additional implied tasks: This is not about detailing “How” to deliver on Central intent. That is for the relevant teams closer to the front-line. This is about understanding the enablers that may need to be in place in order for the team to effectively perform their part in an organisation, in a programme, in a project or in an operational initiative.

For example, working with a Police Force: It was apparent that a Burglary initiative was required to reduce increasing crimes of this type. One of several enablers was the requirement to be able to visualise that data in a meaningful way – being able to see any strong seasonal patterns, whether the volumes were trending upwards or downwards etc. Without such visualisation, incorrect decisions get made and corrective action will have no impact except be a drain on costs. This meant another part of the organisation needed to provide information in this way, rather than providing binary comparisons (e.g. it’s up this month compared with the same month last year).

c. Understand any Operating Constraints: Usually, these manifest themselves in the form of time, resources and money, but could be Rules of Engagement.

For example, working with a global communications provider: Using the appropriate visualisation tools and techniques, network planners had identified a piece of equipment causing issues over a period of time. Budget was a constraint, but because they were able to identify the root cause of the problem as being this piece of equipment, able to calculate the costs of fixing faults on the network emanating from this equipment, a cost-analysis of £16,000 spent on an equipment rebuild vs £50,000 spent in less than a year of fault-fixing enabled a better result for the company and a better result for its customers. This method, propagated across the company led to £m’s in savings and also improved customer service.

d. Review: Take a step back at the start and periodically to assess whether the situation has changed. If it has, the Central Intent may no longer be valid.

For example: In 2014, there was a Central Intent when Teresa May was Home Secretary to appease the Public (mainly in London) by calling for Stop & search to be drastically reduced as a means of pro-actively preventing  crime. Her intent was to prevent worsening relations with the public. This Central Intent is clearly no longer valid with the massive increase in knife- and gun-crime since then, to the extent Londoners are now calling for Stop & Search to be brought back, but possibly with different “Rules of Engagement”.

The Conclusion to this series on Mission Command will appear shortly following this blog.

Next Post
Passion for perfection: Ducati manufacturing in Thailand

One thought on “Turn The Ship Around, Mission Command, and Jumping to Conclusions (Part three from four)”